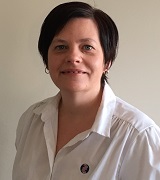 Michelle has been in the role of Branch Laboratory Supervisor since January 2017.
After graduating from the University of Tasmania in 1999, Michelle commenced work at North West Pathology as a Medical Scientist in the Microbiology department where she eventually became Co-Supervisor in 2009.  As well as working in Microbiology, Michelle has been a multi-skilled Medical Scientist working in Haematology and Biochemistry, and has an interest in Quality Assurance in the laboratory having been Quality Co-ordinator for North West Pathology since 2007.
Michelle is a member of the Australian Institute of Medical Scientists (AIMS) and has been active at the Tasmanian Branch level her entire career as well as serving on the AIMS National Board of Directors.